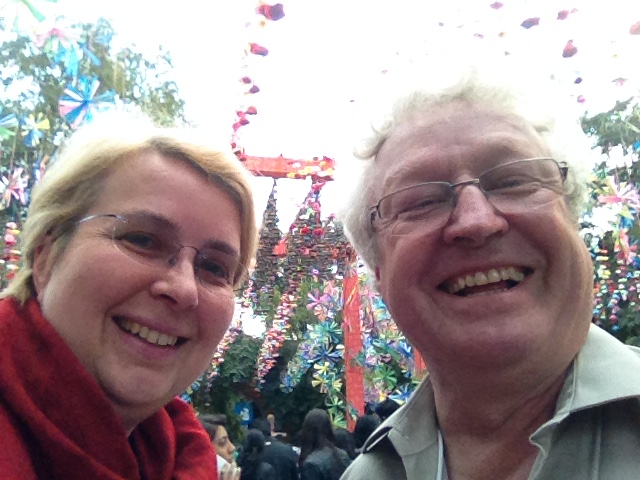 Nigel and Marta moved to Birmingham from Nottingham in 2017 after buying a home that is typical of many suburban areas of Birmingham.  Both were committed to making the home as low carbon as possible, and had previously been involved in the Meadows eco-neighbourhood in Nottingham.  They started by improving the fabric of the building, with additional insulation to the walls, roof and floor; adding additional glazing, mechanical ventilation with heat recovery, and solar panels.  These measures have reduced the home’s carbon dioxide emissions per square metre by 51%.  The measures they have adopted could be used on thousands of post-war suburban homes in Birmingham and beyond.  Nigel and Marta’s home is now warmer and more comfortable with better air quality, and their fuel bills are lower.

The home was built in the 1950s as a four-bedroomed end terrace, with a floor area of 112 square metres.  When Nigel and Marta bought the home, it already had cavity wall insulation and double glazing, as most similar homes will already have.

The downstairs solid floor had been built  on hardcore using an unusual material – ‘red ash’ waste from a power station . This is no longer acceptable practice as  red ash expands and attacks concrete when it gets wet. All the downstairs floors therefore  needed to be replaced.  This meant that Nigel and Marta could have underfloor heating for the ground floor rather than radiators, and also that they also added extra insulation to the floor, below the underfloor heating pipework.  Many people overlook the fact that heat can escape from a house through the floor.  While the walls and roof are the most obvious places for heat to escape, heat can transfer downwards as well as upwards, escaping to the ground or to a cellar below.  Floor insulation, either by insulating below the floor in the cellar, or by replacing a solid floor and including a layer of insulation, can be a very effective energy saving measure.

Loft extensions are one of the most popular ways for people to increase the living space in their home.  Converting the loft was also a chance for Nigel and Marta to add extra insulation to the roof.  Along with external wall insulation and triple glazing the new windows, roof insulation helped to complete the thermal blanket around the whole building.

Most homes in the UK do not have adequate ventilation.  There is a difference between draughts and ventilation.  Draughts are unwanted, uncontrolled movements of air.  Ventilation is planned and controlled movement of air, to ensure air quality.  Lack of ventilation leads to poor air quality, and exacerbates problems of condensation and damp leading to mould – all caused by excessive moisture production in the home and inadequate heating.  Nigel and Marta decided to add more ventilation to their home.  This is a very good move when adding insulation, to ensure there are enough air changes to ensure good air quality and avoid either condensation and damp in winter, or overheating in summer.  They went for a mechanical ventilation with heat recovery system (MVHR) which exchanges heat from the stale exhaust air with the cold fresh air that it draws in from outside, so that the exhaust air is cooled and the incoming fresh air is warmed. This uses a very small amount of energy to pump a continuous, silent, constant background ventilation that retains the heat that is used to keep the home warm.

Low energy LED lighting has been fitted throughout the home – to make sure precious electricity is not wasted. 16 Solar electricity (photovoltaic) panels were installed, enough to supply almost a quarter as much again as the home’s annual electricity requirement. However most of this is during the summer when consumption is lowest and generation is highest. During the nights and especially during the other 3 seasons, because they work long hours and from home, they actually import three quarters of their consumption from the grid. So they are currently investigating using batteries to supply their electricity, and only draw from the grid in the early hours of the morning when it is cheapest.

Nigel and Marta are currently working with researchers from the University of Birmingham to see if a ground source heat pump could provide space heating to theirs and neighbouring homes.

After the work was complete, Nigel and Marta commissioned a thermal imaging survey.  This showed how effective the insulation had been in reducing heat loss.  It also showed some additional areas that needed insulating, to block cold bridges, including the roof of a bay window, and also the walls below the damp-proof course.

After all the work was complete, Nigel and Marta commissioned a thermographic survey.  The thermal images showed:

Nigel and Marta are now working with other local residents to set up Acocks Greener, a community group that will help reduce Acocks Green’s carbon dioxide emissions as a neighbourhood.

What Nigel and Marta have done with their home could be copied by others with post-war homes, including:

The West Midlands Combined Authority and many local and parish councils are publishing exciting and ambitious plans to tackle the climate emergency.  What Nigel and Marta have done with their home shows us the scale of the challenge we face to make our homes low carbon, but Nigel and Marta have also shown us an exemplar that can be replicated to many post-war suburban homes.

If you need help with making your home or business low-carbon, then please take a look at my energy saving advice packages.

Many householders, landlords and businesses are thinking about what they can do to save energy.  It’s not always easy to decide where to start.  Unfortunately unscrupulous sales people are taking advantage of this uncertainty to mis-sell energy saving measures.  These are some of the examples I have heard of recently: A solar company […]

Businesses are rightly concerned about rising fuel bills.  I have heard some shocking stories from businesses over the last few weeks. That’s why I’m relaunching my business energy bill audit service.  If you have one site (with one electricity meter and one gas meter), it’s FREE.  If you have more than one site, […]

Are you a landlord trying to help your tenants afford their fuel bills? Read my top tips

Are you a landlord who is looking to help their tenants to keep their fuel bills affordable?  Are you concerned that rising fuel costs will make it more difficult for your tenants to afford their rent?   Do you want to avoid the expense of having to deal with condensation related damp?  Read my top tips […]

What next after your business’ ESOS report?

If you’re a business with more than 250 employees, you will probably have had an ESOS report done already.  ESOS = Energy Saving Opportunities. What have you done about your ESOS report?  Many businesses don’t do anything .  This is a waste of the perfectly good money they paid for the ESOS […]

It’s just an Energy Saving Show, on my radio

Unity FM radio were kind enough to invite me on to their Connecting Communities broadcast with Mehmooda Qureshi and Dr Peter Rooke. This broadcast will be of interest to people who are looking for expert help with energy saving in their home or business, for two reasons: In this broadcast, I talk about how […]

96% of corporate sustainability initiatives fail. What can we do to raise the success rate?

Recent research shows that only 4% of sustainability initiatives undertaken by businesses, are successful.  We need to raise the success rate because there is a hidden cost of failed initiatives. In my experience, low carbon initiatives fail in businesses, non-profits, and public bodies because: There is not a strategic approach to sustainability Often, businesses […]

Are you considering improvements to your home?  Home improvement is the perfect time to improve the energy efficiency of your home as well as its functionality, style and appearance.  I have teamed up with Avalon Design and between us we can design your home improvement and make sure it is as low carbon as […]

Help for small businesses in Greater Birmingham and Solihull

Consumers want to buy off businesses that are ethical and sustainable.  If you are a small business in Greater Birmingham and Solihull, then you could qualify for subsidised help with decarbonising your business.  Help is also available for your business to take advantage of clean growth opportunities. I am one of the suppliers to the […]