The photo below shows the position on the wall where the existing inverters were installed.  The new inverters will be installed in the same place. 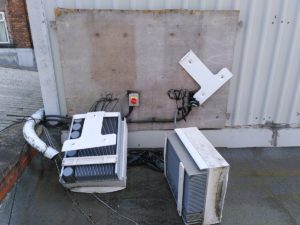 The purpose of the shelter is to protect the two inverters from the elements.

This datasheetgives details of the two inverters that are being fitted.

Please return your quote to phil.beardmore@energyconfidence.co.uk by 13th December 2021.