My coaching packages are named after the Goddess Athena – the first true mentor.

I am a mentor and a coach.  I can use both techniques.

Read on and I will tell you Athena’s story.

More than three thousand years ago, Odysseus, the King of Ithaca, abandoned his wife, Queen Penelope, to go and fight in the Trojan Wars.  Odysseus left his son, Telemachus, in the care of a guardian, whose job it was to guide him.  This guardian was a man called Mentor.

Odysseus was away at war for more than ten years.  During this time, Penelope was courted by a string of young noblemen.  Each of them wanted her to leave Odysseus and marry him instead.  If Penelope were to marry one of them, then Telemachus would lose his right to succeed Odysseus as king.  This left Telemachus with a problem to solve.

Sadly, Mentor failed in his guiding role.  Young Telemachus didn’t know what action to take to protect his birthright, and Mentor wasn’t helping very much to solve Telemachus’ problem.

The Goddess Athena had kept a close eye on the situation and had seen how Mentor had failed in his duty.  Athena shape-shifted into a clone of Mentor.  She now looked like him, but being a Goddess, she was so much wiser. She had all the qualities needed to be Telemachus’ true mentor; she helped him take ownership of the problem in order to solve it.

Under the guidance of Athena, Telemachus now understood the way forward.  Accompanied by her, he tracked down and killed all the young noblemen who wished to marry his mother. In doing this, he re-established his claim to the throne.

A gruesome but thought-provoking tale, I’m sure you will agree.

I will coach you to take ownership of your problems in order to solve them, and achieve your goals.

And no blood will be shed!

It’s terrible, but not surprising, that Athena doesn’t get the credit she deserves, and that a less capable man, Mentor, takes the credit for her work.

I have committed to donate 2% of my income from coaching to Anawim, Birmingham’s Centre for Women, in honour of Athena. 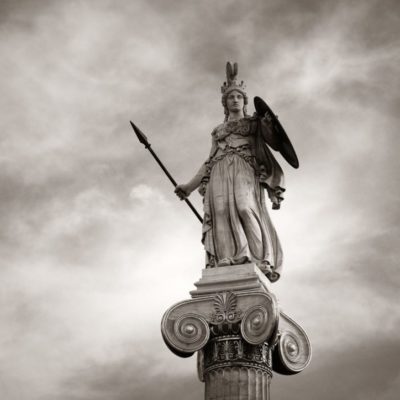